.
“If the police hadn’t come to get me I’d probably be dead now.”
Those are the sobering words of a former Gloucester sex worker who has turned her life around.
Kelly, 16, said: “I was hanging around with some people who weren’t really a good influence. I was groomed into taking drugs.
“It was the desperation of finding the money to fund my habit.”
“I always had a voice in my head that was crying out for help.”

With the help of Gloucestershire Police and its partner agencies, Kelly has now been off drugs for eight weeks and has applied for a course at college.
Pat Hurley, of the One Eyed Jack’s pub in Barton Street, said: “This issue of prostitution has been the most difficult things that we have had to deal with over the years.

“Businesses find it embarrassing that the area has got this reputation and are worried about the social well-being of the girls.”

The following video shows The Manor Women’s Project working alongside one of our partners; Gloucestershire Police.

​Cindy and Destiny with Robert Gregory of MP 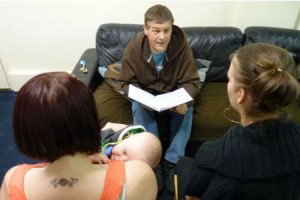 Using a different name to protect her identity, Cindy is one of two women to have spoken out to praise the work of police in addressing the issue and to encourage others to seek help.

“I worked on the streets – for twelve hours a day sometimes. I slept in car parks, on park benches, in the rain. It was no life at all. All you’d think of is where you’re going to get the next fix, the next buzz.

“When they found me I was real ill. They just offered me help. I‘d had enough. I went to the outreach worker and was admitted to hospital. They saved my life. I wouldn’t be here if it wasn’t for them.

“Never lose hope because there’s help available, light at the end of the tunnel.”

Soon after, police helped to get Cindy accepted on to The Manor Project, a not for profit drug rehabilitation residential centre in Walsall catering for girls and women from the age of 16 upwards, including those who are pregnant and suffering from substance misuse.

Since then she has been free of drugs and alcohol and has not been involved in prostitution.

PC Dawn Collings, vulnerable persons officer for the city, says that Cindy’s story shows the constabulary’s approach to the issue, which has been a priority for police in the Barton and Tredworth area since last year, is paying dividends.

“It’s about addressing all the factors involved,” she said.

“I work with our partner agencies to identify those involved and then try and talk to them.

“Many of those women are from broken homes and have been victims all their lives. They’re preyed upon by men who shower them with gifts and introduce them to drugs so that they end up working the streets to fund their habit.

“Often they might loathe police, and it might take years to get them to engage with different agencies.

“We spend a lot of time trying to stop the situation getting to that point in the first place. Those young girls who are vulnerable may go missing frequently so are on the police radar from an early age. We look at each case to see what we can do to divert them from the path they may be going down.

“Tactics are discussed such as bringing a member of The Manor Project down to speak to that young person regarding their own experiences in an attempt to divert the behaviour.”

Destiny, who is also making good progress at The Manor Project having worked in prostitution in Gloucester, believes people’s perceptions need to be challenged.

“Drugs control you, control your life. I hated it, it made me feel dirty but there was nothing I could do about it.

“I started hanging around with the wrong people from about 13. They introduced me to heroin and bought me presents. There are children out there it’s happening to right now. People don’t look at the bigger picture.”

PC Collings says that while every effort must be taken to persuade the girls to engage, police also have to be prepared to take tougher action where needed.

“We have to remember the reputation of the community is tarnished by prostitution in a given area, and the local community suffer because of that and the associated crime.

“Earlier this year we did charge a woman for loitering with the intention of prostitution. That’s because she had refused to engage with us or other agencies over a long period.

Robert Gregory, of The Manor Project, said: “There are too many agencies keeping people on drugs and not enough getting people off them but I think the work police are doing is unbelievable. I think it’s pioneering. By using best practice they’re showing other forces the way forward. People like Dawn Collings are angels. She’s saving people’s lives – and not in the usual way police save lives.

“She’s picking up girls on the path to destruction. She’s intervening to put seeds into people’s heads to show them what’s happening. Hopefully alarm bells will start ringing for them and they won’t have to come here,” he said.

Anyone with concerns about prostitution in Barton and Tredworth should contact their local policing team via the new non-emergency number 101.

A LEADING drug rehabilitation centre in Walsall received a special visit from a police chief this month to bolster links in the community.

Walsall Operational Command Unit’s chief superintendent Kevin Bullas looked around the Manor Women’s Project, in Pleck Road, which has had a 75 per cent success rate in helping woman beat addiction and rebuild their lives.

Chief Supt Bullas, along with PCSO Ade Hartland, from the Alumwell and Birchills neighbourhood policing team, chatted with staff and residents and praised the way the project was turning around the lives of ex-drug users, the majority of who had a drug habit which was costing an average of £400 per day.

“I met the organisers and some of the residents who use the project and was impressed by their frankness and realism,” Chief Supt Bullas said.

“The Manor Women’s Project is based on education and helping to give women a fresh start and we are happy to work alongside the project.”

Alison Cattell, director of the project, said she was grateful the police chief had taken time to visit the team and said he was a ‘really nice down to earth fellow and a genuine Black Country guy’.

“He was genuinely interested in how the project works and spoke at length with our clients and was particularly interested in the educational opportunities that run in the background of their recovery programme,” she said.

“Chief Supt Bullas will always be welcome at the Manor project.”

Centre of hope where women drug addicts kick their habits

Chrissie was addicted to heroin and crack cocaine for six years. She first smoked cannabis at 12 and by 18 had moved onto the hard stuff. Sometimes she’d struggle to find veins in which to direct the poison. “Every time you use a vein it collapses,” Chrissie says. “It goes flat so you move on to the next, to the next. After so many months, there are no veins left.” She says she’s ashamed of what she did.

Kay used to spend £200 to £300 a day on Class A drugs and eventually had sex with a man for money to pay for her drugs. She vowed she’d do it only the once but it was “quick money, not easy money because it wasn’t easy, just quick” says Kay and so she began her career as a prostitute.

Pop stars Chris Difford from Squeeze and Marti Pellow from Wet Wet Wet have offered to hold a fund-raising gig for a Walsall drugs hostel which helps addicts from across the country beat their addiction.
The celebrities made the offer after hearing about the success the Manor Women’s Project has in helping women escape from a life of drug use, crime and prostitution.

The gig will further raise the profile of the 17 bed unit on Pleck Road which has won national awards for its work but which receives no official funding from national or local government apart from housing benefit for each of its residents.

BBC 5 Live presenter Victoria Derbyshire recently spent two days at the project in Walsall. Read her comments and watch the programmes she made below.

The Manor Women’s Project was founded in 2003. It is a rehabilitation programme for drug-users based in a residential centre in Walsall, West Midlands. Welsh writer, poet and artist Paul Rees has recently been involved in the project. Commissioned by The Manor Project, he helped residents to use creative writing and poetry as a positive release for their emotions and to help increase self awareness. This work has now resulted in a short book, entitled Drugzkillzthatzfactz, which includes original poetry from the residents and support staff, as well as taking a look at statistics from the inside and discussing creative methods of working with addiction. Ultimately, it provides an overview of the work of the Manor Women Project. BBC Radio Five Live are spending a day at The Manor Project on 30 July 2009 and it is proposed that some of the poetry shall be read by individual contributors.

The Manor Women’s Project: Paul Rees from Support Solutions describes a project which is turning around the lives of women with class A substance misuse needs many of whom engage in sex work to fund their addictions