The Manor women’s project has four awards associated with the project.

In 2006 the Manor women’s project was awarded the tackling drugs saving lives award in the West Midlands, the award was presented at the Home Office by Vernon Coker the drugs Minister.

For most of her adult life, Susan had been hooked on drugs. 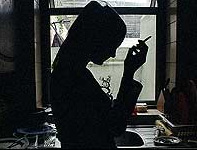 She had been in and out of drug rehabilitation centres but always fell back into drug-taking and crime to pay for her habit.

But two years ago Susan arrived at Manor Hotel in Walsall in the West Midlands, which helps women get off drugs and out of a life of crime.

Since then she has been able to kick her habit and says she has moved on with her life.

“I was on drugs for 21 years. I had been up and down the country in many rehabs and nothing had ever worked.

“I came to the Manor Hotel and this place has worked for me. ”

“My life has been totally changed around, I cannot praise them enough.

Robert Gregory, who works at Manor Hotel, said it was originally set up in 1984 for vulnerable and homeless people.

In 2003, it started to look after young women coming off drug addiction.

He said: “We have been running for three years and everything has gone from strength to strength.”

The aim of Manor Hotel is to get women back into normal life through counselling, education and continual support.

The mother of one drug user said the service had saved her daughter’s life.
Sheila said: “My daughter had got a month to live. If it was not for the staff at the Manor Hotel, she would have died.

“It was like winning the lottery having my daughter looked after by these people. They turned her life around completely.”

This team stood out because they all work tirelessly to ensure
serviceusers receive high levels of treatment
Martin Barnes, DrugScope

Manor Hotel has won a regional award for Drug Team of the Year in the West Midlands.
On Tuesday it will be competing for the national award as part of the government-led Tackling Drugs Changing Lives campaign.
The awards were set up to recognise the work of teams and individuals taking positive action to tackle drug issues in their local community.

Martin Barnes, chief executive of DrugScope and one of the awards judges, said: “This team stood out because they all work tirelessly to ensure service users receive high levels of treatment, encouragement and support.

“We had nearly 30 nominations for the Manor Hotel – all from service users or relatives of service users whose lives have been impacted on by the team.”
Alison Cattell, director and support worker, from Manor Hotel said: “It’s a huge honour and a credit to the hard work of the staff at Manor Hotel.”

In 2005 solicitor Stephen Scully from Ian Henry and co solicitors won legal aid solicitor of the year award for the work with the clients from The Manor Project the award was presented to Steve by ex prime minister’s wife Cheri Blair. 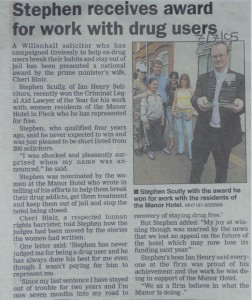 At a glittering and impressive Awards Evening held in Birmingham’s Burlington Hotel, all the winners were presented with their just desserts.

The evening fizzed and was memorable due to the hard work and enormous talents of the host, Brian Conley.

Here are all this year’s winners.
Winners of Awards and winners of nomination categories.
A true reflection of the high quality of program me making within the Midland Centre’s area.

At another awards ceremony the Tales of the Unaccepted – Manor Hotel Documentary went on to win:

“Tales of the Unaccepted – Manor Hotel” this time it was for best current affairs program. What’s next?